Relections from the President
by Lynn Elwood

Looking back on the accomplishments of 2011 and early 2012, a lot has been done within Canada. We have held a number of successful fundraisers including the Golf Tournament as well as individual events such as Boogie for Barth, a 50th Birthday bash and a Poinsettia sale. We have received a number of donations and expanded the amount of grant money we received, partially through ties with the United States BSF organization. Coupled with prudent expense management by our Board and Executive has resulted in a strong financial position for 2012.

The Scientific and Medical Grant funded by BSF of Canada last year was “A screen for drug leads for the treatment of Barth syndrome” submitted by Christopher R. McMaster, Ph.D., Professor of Pediatrics and Biochemistry, Dalhousie University, Halifax, Canada. This year, we have once again been able to fund a complete grant: “MLCL AT-1 elevates cardiolipin and mitochondrial function in cardiac myocytes of taz knockdown mice” by Grant Hatch, PhD, Professor, University of Manitoba, Winnipeg, Manitoba, Canada. We are pleased to be able to fund grants recommended by the Scientific & Medical Advisory Board for these Canadian researchers and very much appreciate the closer working relationship that is developing between them and the Canadian organization.

We have had some good success in our Family Services program this year, with members of our board being in touch with and having the opportunity to meet with almost all of our boys and men affected by Barth syndrome. In April, we brought five of them together in a family outreach event that accompanied our Annual General Meeting. A number of the men affected with Barth syndrome and their siblings are now official voting members of BSF of Canada and it is a pleasure to have more of them participating in the AGM meeting itself.

We continue to publish Canadian newsletters (now with the new team of Les Morris and Paula Sisson) which are well received by our family and donor population. Another significant project this year was the trip out east where awareness and Family Outreach events took place. Opportunities like we had in Halifax with Dr. McMaster and several medical doctors are most beneficial since we are able to meet with a larger number of physicians and scientists.

This year, the biennial Family, Scientific and Medical conference was held in Florida in late June. It was a great conference! Despite hurricane Debbie’s attempts, we had 388 people at the conference, including seven new families and 44 Barth affected individuals. This event was a slightly different conference than in past years, with greater emphasis on ensuring the boys and men with Barth had extra time together and that there were more options for people to attend a variety of sessions, both family and research focused. There were medical consultations, and for the affected boys and men, there were fewer traditional “clinics” involving challenging and often exhausting tests.

The sessions during the conference provided considerable flexibility. They were arranged so that Scientific and Medical sessions that might be of interest to families were held at times when people could attend and all participants were encouraged to do so. It was extremely inspiring to watch as clinical doctors shared information with researchers— the full group of medical and scientific people talked about what findings could mean and openly discussed options for next steps in research. We had a number of discussions with researchers from around the world, shared their poster session and enjoyed social time with them.

The family sessions contained additional opportunity for newer families to share concerns and questions with longer term families as well as providing questions for presenters. In both the family and scientific sessions, there was strong participation from the older Barth affected individuals. A number of them presented to the physicians and doctors, provided introductions in the family sessions or shared their experiences and issues with the families. This direct involvement from so many of them really added a powerful incentive to all of the discussions and research and, as always, ensured that our individuals with Barth are at the center of all that we do. They made a tremendous impact on the audiences!

Barth Syndrome Foundation of Canada was once again prominent at the conference in the provision of volunteers who helped in clinics, registration, organization and several other areas. We were also a key contributor to the conference, sponsoring the Scientific Poster session and some of the pro-grams for the affected individuals.

As always, our volunteers and our supporters make all of our work possible. We remain a completely volunteer organization and we continue to do great things that rival charities larger than ourselves. We are very lucky to have such a strong and committed Board, Executive and larger set of volunteers that apply their tremendous and varied talents to all of the things we do, bring great new ideas, and inspire us with their enthusiasm and dedication.

Our donor list continues to grow. We appreciate each new supporter and the continued contributions from our repeat supporters. Every dollar and every in-kind donation helps and makes a true difference to the work that we can do over the year. Especially now, we need all the help we can get and thank each of you who support us. We have already seen many accomplishments this year and it is thanks to all of you. Please continue to support us as we move through the rest of the programs this year and in coming years. 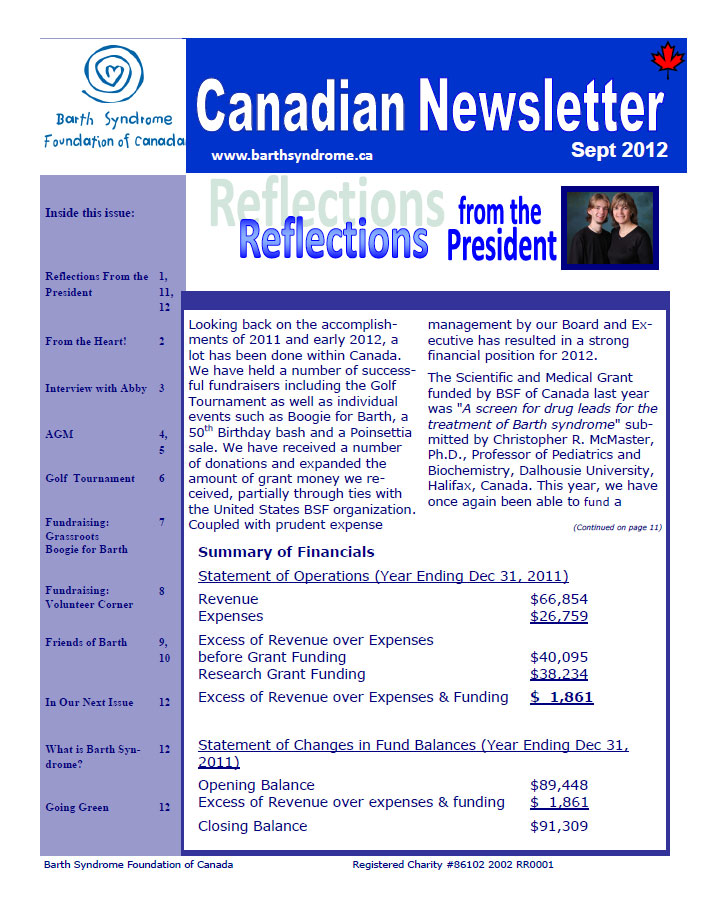 Barth Syndrome Foundation of Canada does not endorse any drugs, tests, or treatments that we may report.

This website is for informational
purposes, always check with your
physician before adopting any
medical treatment.

Barth Syndrome Foundation of Canada does not endorse any drugs, tests, or treatments that we may report.

This website is for informational purposes, always check with your physician before adopting any medical treatment.